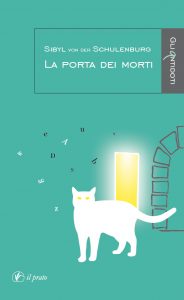 I had the story in my mind for long time. I saw its colors and its forms come to light, grow and change over time. I heard its sounds: the voices, the meows, the barking, and even some whinnies, all climbing up to the Tuscan sky.

I hatched it, loved it, and expected it. It has been an incubation of love that I have monitored daily, savoring the formation of each individual element, and I rejoiced on the day when I could catch a glimpse of its final silhouette. That was the very moment I had the certainty of its existence, and I informed the publisher that I had a new psycho-novel to offer.

But it was not always easy. My characters, my creatures, have a tendency to become independent and want to do things their own way. I wrap them into a story and form them into precise emotional shapes, but they are intolerant—impatient, like kids, and often beyond my control. I’m not able to isolate them. It seems they are always aware of the existence of the others, they do everything to interact among them, and the results of these rule violations are deleterious. Often I have to take them, one by one, and decontaminate them and warn them.

But in the end we made it, and the new novel, “La porta dei morti” (“The Door of the Deceased”), is born.

The title refers to the ancient Etruscan little doors through which the deceased had to leave the house and that were closed, sometimes walled, immediately afterward. In this way, death would not find a way to get back into the house.

Despite the title, this is the most tender of my psycho-novels, and it was first presented at the BUK Festival in Modena on February 21.

Many visitors felt attracted to the cat on the book cover. I could not resist their curiosity, and I revealed the meaning of that animal: it represents the creativity, the inspiration of the older protagonist of the story, a Swiss writer who lives on the Etruscan Coast.

We talked about the ancient Etruscan people, their way of thinking about life and death, as well as of the eternal love between a couple of young Etruscans. Legends.

Speaking of my book, still fresh from the press, I soon realized that it had taken flight. I had released it as if to go among the people.

Another one that has left …